I enjoyed this very much, as I expected I would!

Are you interested in small quick bug reports for a maintenance release? Nothing close to game-breaking, but it would give you an excuse to signal boost if you haven't moved on completely from development.

I'm glad you enjoyed the game, even if it's really basic compared to Archipelago! (but it also only had about 1/7th of Archipelago's development time).

And yes, please let me know about any bugs you found. I always try to fix any discovered issues with my games, even the older ones.

Also, you are allowed to use a repair kit during a fight or when exploring the wilderness. This is slightly unrealistic, but few people are going to notice it. Also 1) it might be hard to fix and 2) fixing this bug might cost the player a bit of convenience anyway. So I'm not sure if it's worthwhile.

2. Typos (I hope it's a matter of just search/replace in the source, but if you need further details, let me know) :

briging -> bringing (when you join GalGeo)

The cruel pirate captain is dead! You have saved the inhabitants of X from the terror of constant raids. The news spread quickly among the locals, and your fame increases! == The news spreads

In your most terrifying voice, you scream dreadful threats at the pirate. You boast to be the greatest warrior in the Galaxy, slayer of countless corsairs. You're so convincing the pirate loses the will to fight and runs away! == You boast of being

You furiously stab at the beastmaster, piercing the thick hide and dealing damage! == its thick hide

The X of X are happy to hear you're considering hunting some beasts. The wild and bloodthirsty creatures are harassing them constantly, wounding and killing many. They seem to be controlled by intelligence higher than animal. == higher than animals/other animals? a higher-than-animal intelligence?

You've got rid of many pirates, who either are dead of have deserted. The remaining pirates stay away from you. == dead or have. (Also "gotten" sounds a bit better)

You dock with the shipwreck, which is in surprisingly good shape, and go onboard to explore it. == arcane stuff: "The onboard computer" but "on board" as an adverb is 2 words.

You make one more attack and almost pin down the creature's arm The creature makes a gurgling noise and uses her last bit of strength to push back. For a moment, your arms are in balance, then the alien pins you down. == creature's arm. The

However, when you tell the mercenaries about the suppression device you obtained from the scientist, they agree to attack the slavers base with you for a non-negotiable sum of 10000 credits. == slavers'

There are tooth markings on the bones of the skeleton and a golden locket around its neck. There is also a leather bag nearby, with documents that identify the unfortunate victim of the beasts as X from X. == > toothmarks (?) may be stylistic

You shoot at the very right moment, wounding the pirate captain. == just the right moment

News of your exploits has reached the alien warlord, who now is determined to put an end to this personally! == who is now

(Python helped me find some of this.)
Reply
agat1 year ago(+1)

Thanks! I posted an update fixing these issues, except for the repair kit one. You're right - changing this would be complicated, and it's not a bug, just an unrealistic feature (that benefits the player).

Also - are you sure that 400 credits was enough to buy common goods at the bugged market? I found the typo that caused this issue, but it required 500, not 400, to buy the goods, and now I'm wondering if I missed something.

Nice job fixing everything! Yeah, I thought using the repair kit might be a bridge too far. But I saw it. I think most players will prefer to heal whatever, whenever.

I think I see where the disconnect was on the goods pricing. Here are three different lines of code I had from my downloaded local copy:

So when you searched and replaced, you saw the one line of code to fix. But there were three.

(Note: it'd be possible to have tested a lot more values--all multiples of ten--if I had accumulated enough credits and then bought/sold medikits and star crystals. But I didn't see the way to at the time.)

I think this ties up the ambiguities between what each of us saw, and it probably explains why nobody saw it earlier.

This was a very enjoyable experience, thank you! Exciting but not too stressful as some more roguelike games often are, so the stress doesn't drain the oldschool feeling of adventure.

This was good, but I think some kind of time limit would make it better. For example, if you have Charisma, it seems like it's always a strictly better choice to gather stories from the locals before doing anything else. Similarly, it seems easy to build up money by finding two planets, one that sells exotic items and buys common items, and one the reverse, and carrying goods between them.

Things like gathering stories and trading are designed to give a cash boost to a starting character who may be too weak to do some of the more challenging content. I agree there's (almost) no reason not to always do them early if you can. However, if you collect stories from all 16 planets, it means you've also mapped the entire galaxy, and probably encountered some enemies/events on the way. As for shuttling goods between planets - well, first you have to find those market planets. And if you buy and sell all the available goods, you may find it difficult to complete some quests that require these items later (you can find goods through exploration/travel encounters, but it's not as sure and simple as buying them from the market).

Personally, I think a time limit would clash with the "explore at your own pace" nature of the game, but I know it's a matter of taste and that some people would prefer a tighter challenge.

If anything, I believe the game could benefit from more content that would make more strategies possible. While I won't update 4x4 Galaxy any more, I'm working on another project with the same core idea that will have much more content and variety.

This is extremely cool. This hits the sweet spot of text based, procedurally generated and space exploration that makes this extremely fun to play.

At first I thought the only procedural generation is about the layout and nature of planets in the game universe, but there is clearly much more to discover. The game seems really well thought out(despite being easy to get into). There are different starting characters with different goals and the game rewards experimentation and learning by death(which usually detracts me from playing further, but here it works more like in roguelike games, where I just want to try again). It's not long(especially when you die) and can be enjoyed as a coffee break game. I highly recommend this game. 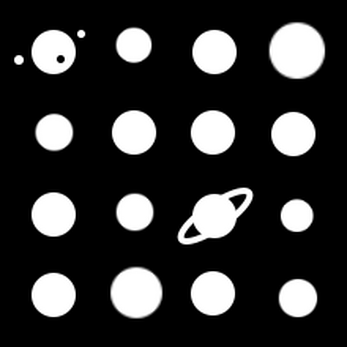